The summer term was brought to a fitting end with the Grand Summer Open Air Concert held in the College grounds... On the evening of Saturday 2 July, the grounds of the College were opened up to over 1800 people for a concert like no other that Churcher's has seen in all of its 300 years!  The programme included such varied items as the Pirates of Penzance to 'O Fortuna' from Carl Orff's Carmina Burana through to Sweet Child of Mine by Guns 'n' Roses alongside a nod to the Last night of the Proms with Rule Britannia.  There was even a rendition of the school song which was very warmly recieved by OCs in the audience! Both the UK's and Ukrainian National Anthems were played and sung with great gusto to a flurry of yellow and blue amongst the red, white and blue of the Union Jacks! 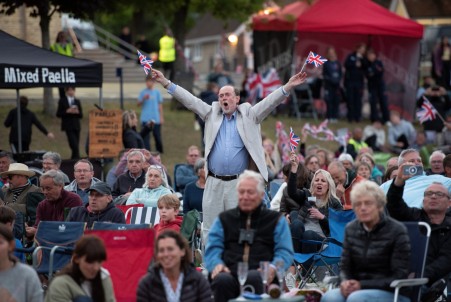 With street food vans serving flat bread wraps, crepes and paella and ample space for those younger members of the audience to run around freely there was a real festival vibe.  Helen Purchase, Director of Music, said of the evening "it was a definite career highlight to conduct the Tercentenary Orchestra and Chorus to such a huge audience on a stage allegedly as big as that of the Pyramid Stage at Glastonbury.  Something I shall never forget."

It was a fitting end to the summer term in this very special 300th anniversary year for Churcher's.

More photos from the evening can be seen here. Former Member of Staff on a mission...

Former member of staff Jasmine Elmer (Rendell) has branched out into broadcasting... More...